In April, Facebook announced a series of planned investments in new audio products, including a Clubhouse live audio competitor as well as new support for podcasts. Today, Facebook is officially rolling these products with the launch of Live Audio Rooms in the U.S. on iOS, starting with public figures and select Facebook Groups, and the debut of an initial set of U.S. podcast partners.

The company tells us Live Audio Rooms will become available to any verified public figure or creator in the U.S. who’s in good standing with Facebook and is using either a profile or the new Facebook Pages experience on iOS. For Facebook Groups, the feature is launching with “dozens of groups,” we’re told.

Both products will become more broadly available in the weeks and months ahead, as more people, podcasts, and Groups are brought on board. Meanwhile, 100% of Facebook users in the U.S. will be able to listen to Live Audio Rooms and podcasts as of this week. 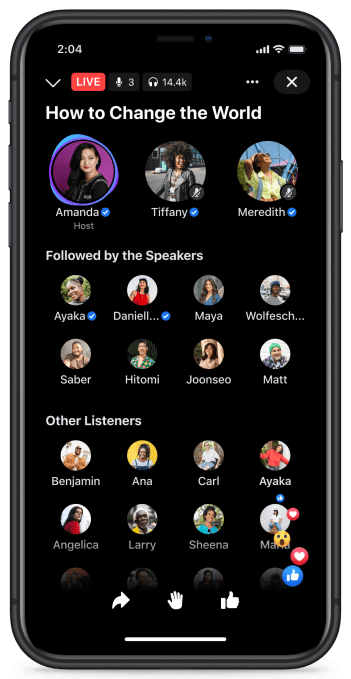 The event’s hosts appear in rounded profile icons at the top of the screen, while the listeners appear in the bottom half of the screen, as smaller icons. The active speaker is indicated with a glowing ring. If verified, a check appears next to their name, as well.

There are also options for enabling live captions, a “raise hand” tool to request to speak, and tools to share the room with others on Facebook, through things like News Feed or Group posts. 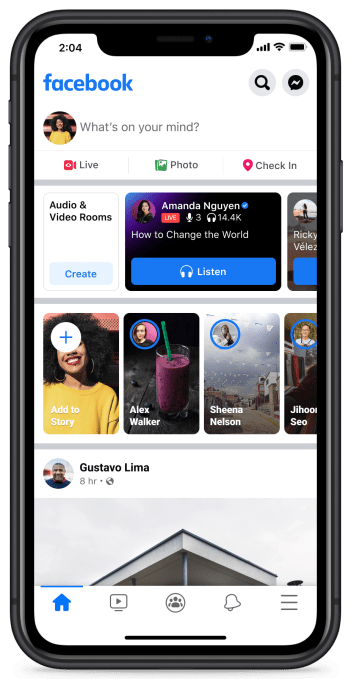 Facebook does things a little differently than others in some places. For instance, hosts are able to invite people to join them as a speaker in advance of the session, or they can choose listeners during the stream to join them. In each session, there can be up to 50 speakers and there’s no limit on the number of listeners, Facebook says.

During the session, users will be notified when friends or followers join the chat, too.

While listening, users can “Like” or react to the content as it streams using the “Thumbs Up” button at the bottom of the screen which connects you to Facebook’s set of emoji reactions. And with today’s official launch, listeners can also now show support to the public figure of the Live Audio Room by sending “Stars.” These Stars can be purchased during the conversation and used at any time, similar to how they work with other Facebook Live content.

By sending Stars, the listener is bumped up to the “Front Row,” a special section that highlights the people who sent the Stars. This allows the event’s hosts to easily recognize their supporters and even give them a shout out during the event, if they choose. 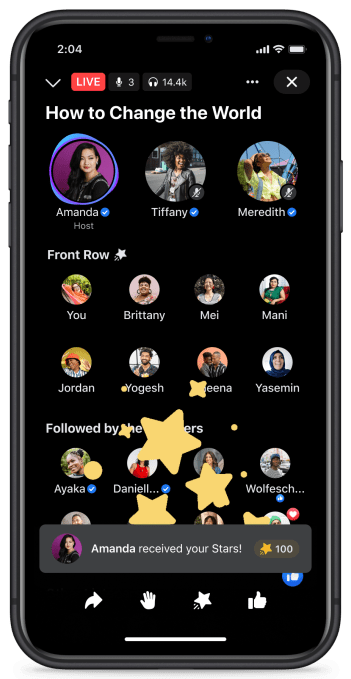 Another new feature allows hosts to select a nonprofit or fundraiser to support during their conversation, and listeners and speakers can directly donate. A progress bar will show how much has been raised during the show. 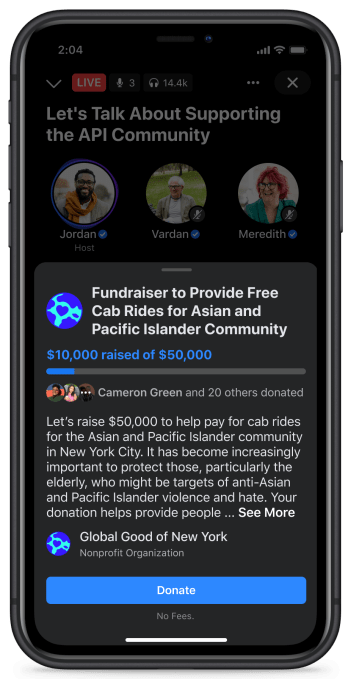 Meanwhile, for Facebook Groups, admins can control whether moderators, group members or other admins can create a Live Audio Room. Both members and visitors can listen to the rooms in public groups, but in private groups, the rooms are limited to Group members.

Facebook users are alerted to all the new Live Audio Rooms via the News Feed and Notifications, and can sign up to be reminded when a room they’re interested in goes Live. Live Audio Rooms will also be discoverable within Facebook Groups, where available. 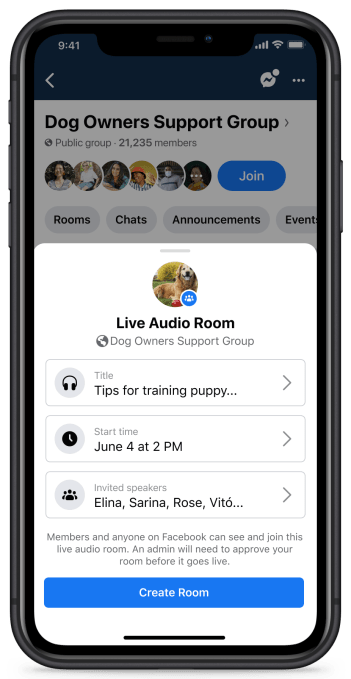 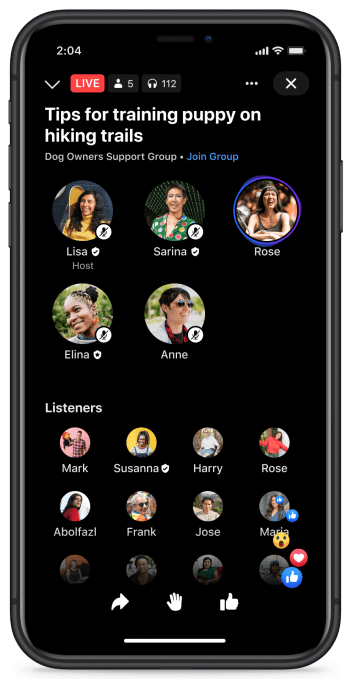 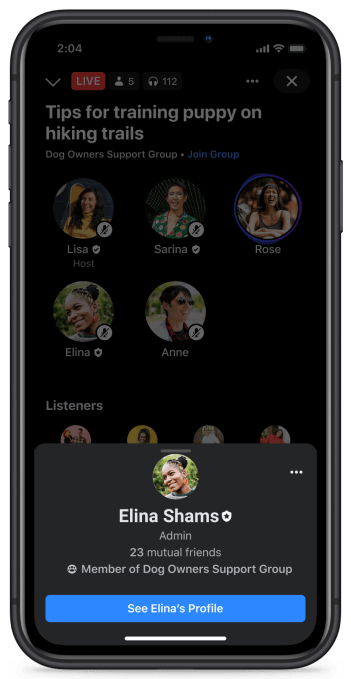 Alongside the launch of Live Audio Rooms, Facebook is also beginning to roll out its planned podcast support with a few select creators. These include Joe Budden of The Joe Budden Podcast; “Jess Hilarious” of Carefully Reckless from The Black Effect Podcast Network and iHeartRadio; Keltie Knight, Becca Tobin, and Jac Vanek of The LadyGang; and Nicaila Matthews Okome of Side Hustle Pro. Facebook will open up to other podcasters this summer. 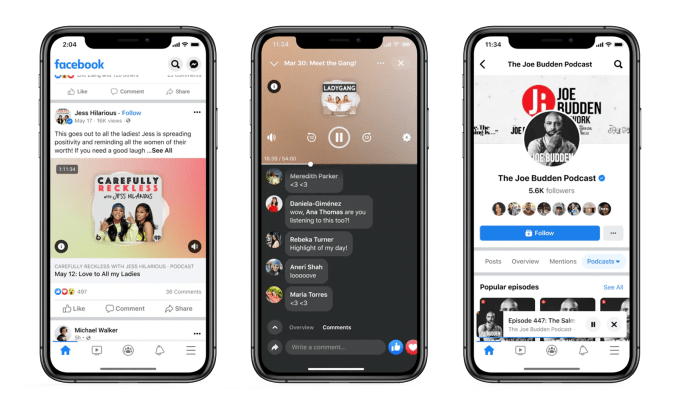 To be clear, this new podcasts service is different from the recently launched music and podcasts player in partnership with Spotify, which lets users share content from Spotify to the social network. The new feature instead involves podcasts that are streamed via public RSS feeds directly on Facebook, not delivered by Spotify. However, the miniplayer for podcasts on Facebook will look like the miniplayer for the Spotify listening integration (also known as Project Boombox), and they will behave similarly. But they are not the same.

The new podcast listening experience lets users listen to podcasts as they browse Facebook, either in a miniplayer or fullscreen player with playback options, and even if the phone’s display is turned off. This makes Facebook, in a way, a native podcast streaming app because it allows people to listen to audio without needing another service — like Spotify or Apple Podcasts, for example.

Facebook had earlier said there are over 170 Facebook users who are connected to a Page for a podcast, demonstrating user interest in podcasts on its social network. 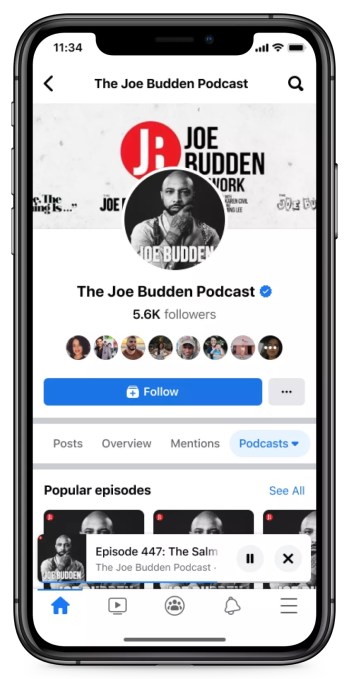 With the launch of the Facebook Podcast service, the company is asking podcast creators to give it permission to cache their content on Facebook’s servers, which we’re told is being done to ensure the content doesn’t violate Facebook’s Community Standards. However, because the podcasts are still being streamed via RSS feeds, they will be represented in the metrics provided by a podcaster’s hosting provider.

Last week, Facebook emailed podcast page owners details on how to set up their show on Facebook, noting they can link their podcast’s RSS feed to automatically generate News Feed posts for their episodes. These are also featured on a “podcasts” tab on their Page. According to Facebook’s Podcast Terms of Service, creators are granting Facebook the right to create “derivative works,” which likely refers to an upcoming clips feature.

Facebook says later this summer, it will add the ability to create and share short clips from a podcast, along with other features, like captions. Longer-term, it will create social experiences around podcasts, as well. It’s also working with creators to develop and launch its new product, Soundbites, which are short-form, creative audio clips. This will launch later in 2021. 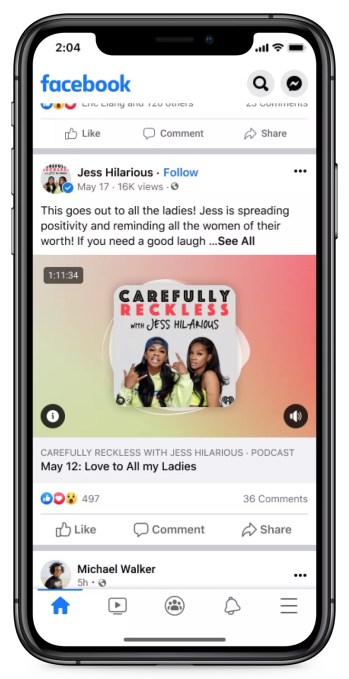 Other audio products in the works include a central listening destination and background audio listening for videos.

Facebook says this new destination will be a place where all the different audio formats across Facebook are available, not just podcasts, and will help users find to new things and people to listen to. More details on this project will become available later this summer.

Prior to today, Facebook quietly tested Live Audio Rooms in Taiwan and internally with Facebook employees Those tests will continue. Last week, Facebook CEO Mark Zuckerberg hosted the first trial of the new service in the U.S., where he was joined by other Facebook execs and a few Facebook Gaming creators.

Zuckerberg has been bullish on the potential for audio across the social networking platform. He even appeared on Clubhouse a couple of times to discuss the topic ahead of announcing what is, essentially, Facebook’s own Clubhouse competitor.

“I think the areas where I’m most excited about it on Facebook are basically in the large number of communities and groups that exist,” Zuckerberg had told Platformer, at the time of the original announcement. “I think that you already have these communities that are organized around interests, and allowing people to come together and have rooms where they can talk is — I think it’d be a very useful thing,” he added.

Facebook expects to expand its audio products globally in the months ahead. 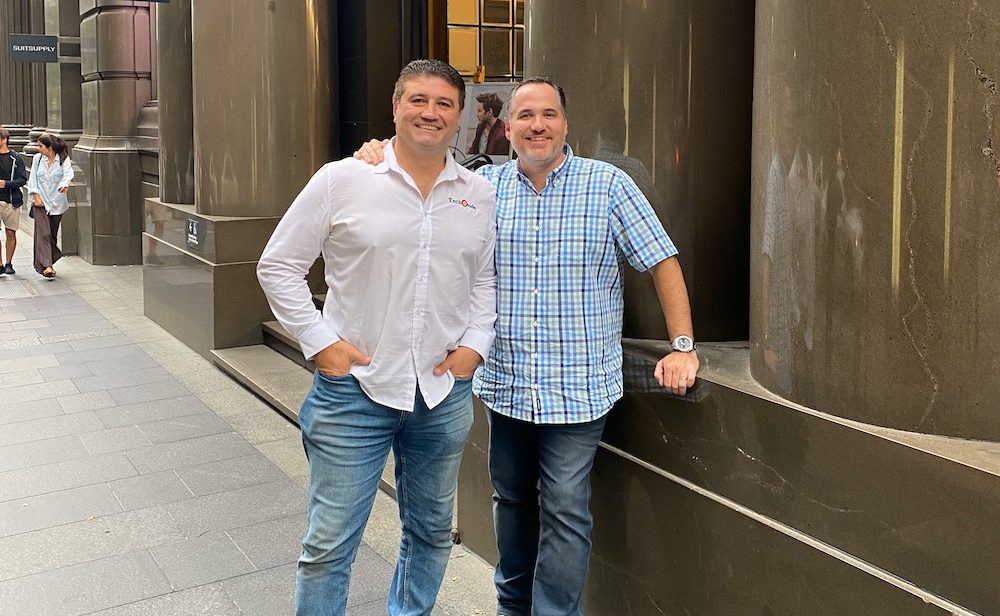