Jio Platforms, run by India’s richest man (Mukesh Ambani), and Google on Thursday unveiled JioPhone Next, an affordable Android smartphone as the top Indian telecom operator makes further push to make it more affordable for people to sign up to its network.

The Indian firm, which secured $4.5 billion investment from Google (and another $15.5 billion from Facebook and others) last year and shared plans to work on low-cost smartphones, said the JioPhone Next will help roughly 300 million users in India who are still on 2G network upgrade.

The phone, which is “powered by extremely optimized Android” operating system, will first launch in India on September 10 and will eventually be made available outside of the country.

Jio Platforms, which serves 425 million subscribers, is positioned to add another 200 million in the next few years, said Mukesh Ambani, chairman of Reliance Industries, at its annual general meeting Thursday.

The JioPhone Next will be the “most affordable smartphone” globally though he didn’t reveal the price or the hardware specifications of the handset, said Ambani.

Google CEO Sundar Pichai said the company has also entered into a 5G cloud partnership with Jio Platforms. “It will help more than a billion Indians connect to a faster and better internet, support businesses in their digital transformation, and help Jio build new services in sectors like health, education and more — laying a foundation for the next phase of India’s digitization,” said Pichai.

“As part of this collaboration, Reliance will also shift its core retail businesses to Google Cloud’s infrastructure. They will be able take advantage of Google’s AI and machine learning, e-commerce, and demand forecasting offerings. Harnessing the reliability and performance of Google Cloud will enable these businesses to scale up as needed to respond to customer demand,” he added. 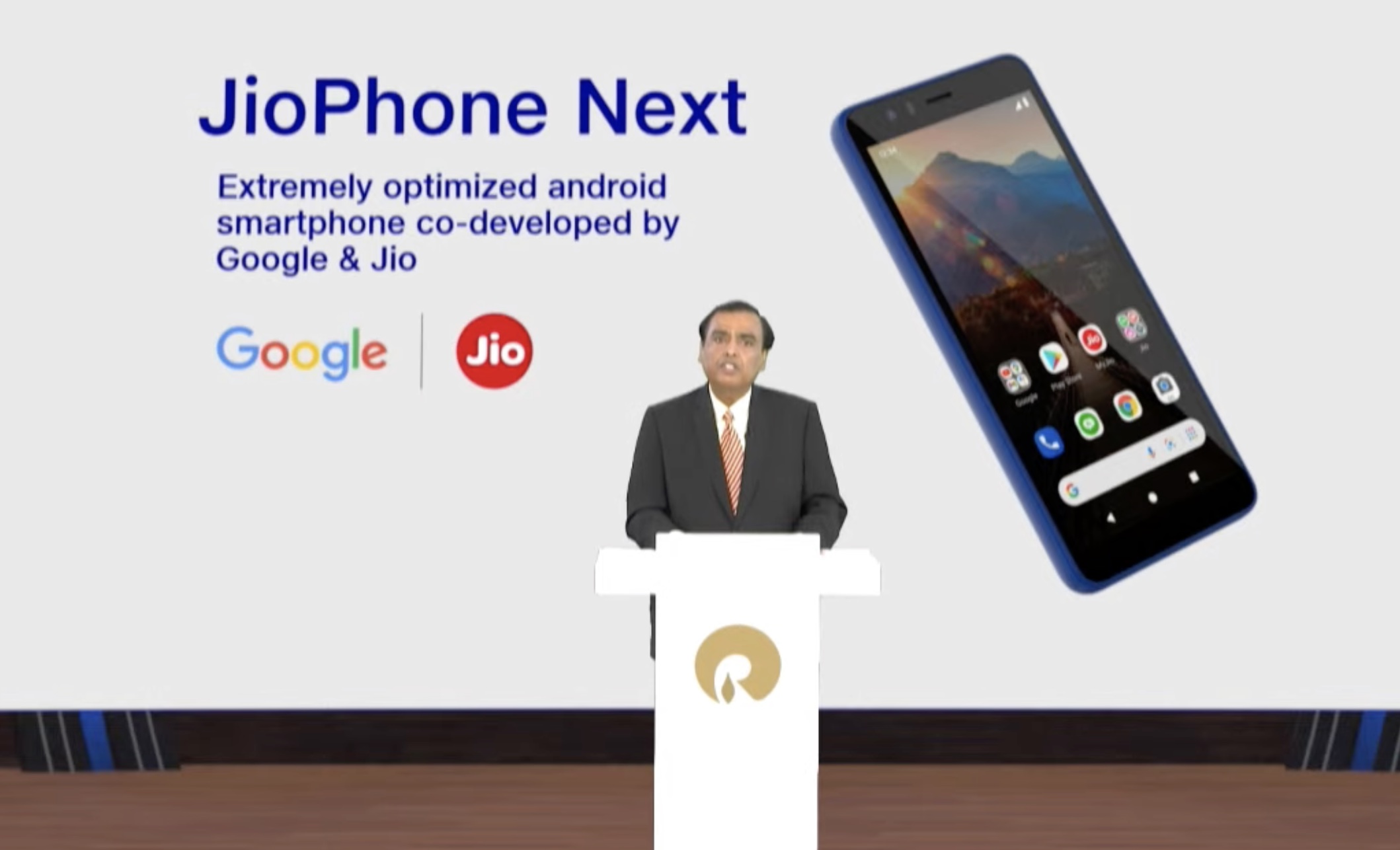 “We have worked closely with the Jio team on engineering and product development on useful voice-first features that enable these users to consume content and navigate the phone in their own language, deliver a great camera experience, and get the latest Android feature and security updates,” Google said in a statement.

Even as most smartphones that ship in India, the second largest market, are priced at $150 or less, customers looking for a smartphone priced under $100 are left with little choice. And that choice has further shrunk in recent years.

Smartphone makers are aware of this whitespace in the market, but have found it incredibly challenging to meet this demand. Some, including Jio Platforms, which has amassed over 425 million subscribers, earlier explored a range of feature phones to reach small cities and towns of India. Jio Platforms’ KaiOS-powered feature phone, called JioPhone, had amassed 100 million customers as of late February this year.

In a recent report to clients, analysts at UBS said that after accounting the recent price surge of memory component, any smartphone priced at or under $50 is likely selling at cost.

“While this move by Jio will accelerate 2G to 4G migration, we evaluated how interesting this space would be for other smartphone manufacturers, especially key players like Xiaomi. Xiaomi, the unit market leader in smartphones in India, is unlikely to follow up with a $50 smartphone, in our view,” they wrote in the report, obtained by TechCrunch.

Google, too, has previously made several efforts — $100 Android One smartphones program in 2014 and low-resource intensive Android Go operating system in 2017 — to expand the reach of its handsets. The company has also backed KaiOS, which powers popular feature phones.

PrevPreviousThis circle is actually a crazy A$6,500 Bang & Olufsen speaker that can go on your floor or your wall
NextZero trust unicorn Illumio closes $225M Series F led by Thoma BravoNext

Google Meet is getting new audio and video locks to let hosts turn off the microphones and cameras of other participants. The new feature essentially lets you mute a user and prevent them from unmuting themselves until you unlock them. Earlier this year, Google rolled out the ability for hosts to mute everyone all at […]

The US Department of Commerce announced a new rule to prevent the sale of hacking tools to China and Russia, The Washington Post reports. The Commerce Department outlined the chang…