How I shot the Super Blood Moon through my telescope 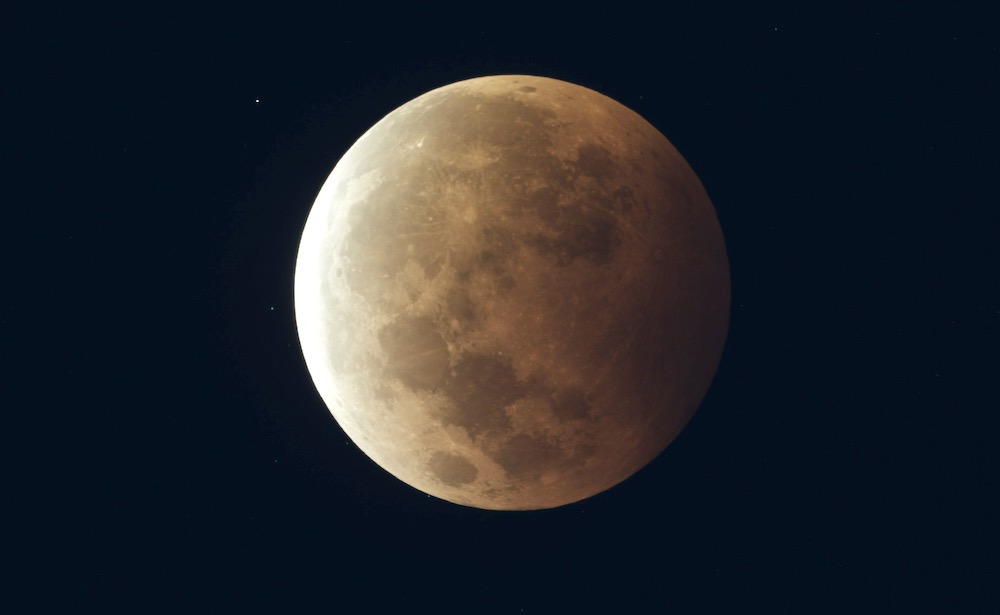 It was a big night last week when we were able to see the Super Blood Moon and everyone with a camera did their best to try and capture it whether that camera was on a smartphone, had a long lens attached to it or was on the end of a telescope.

My camera was on the end of a telescope and I was pretty pleased with the results.

I’ve had a lot of people asking me how I managed to capture it in such high quality so I’m going to go through what was involved. 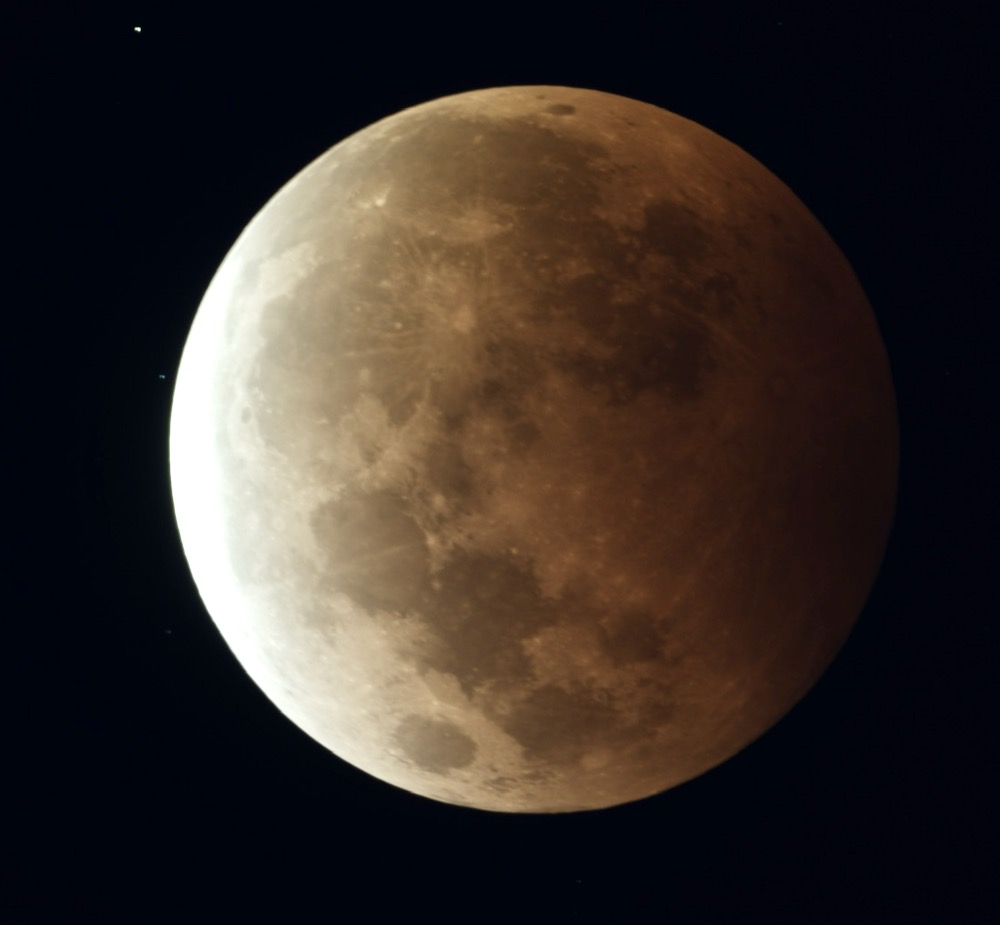 That sort of clarity can be achieved with a telescope with the right focal length. The one I chose was the Skywatcher Esprit 120ED refractor telescope which has a focal length of 840mm so I could frame the Moon in a single shot.

I toyed with the idea of using the Celestron Edge HD 9.25 Schmidt-Cassegrain scope with a huge focal length of 2350mm.

If I used the Celestron I would have had some gorgeous shots but that would be of part of the moon – not all of the moon. 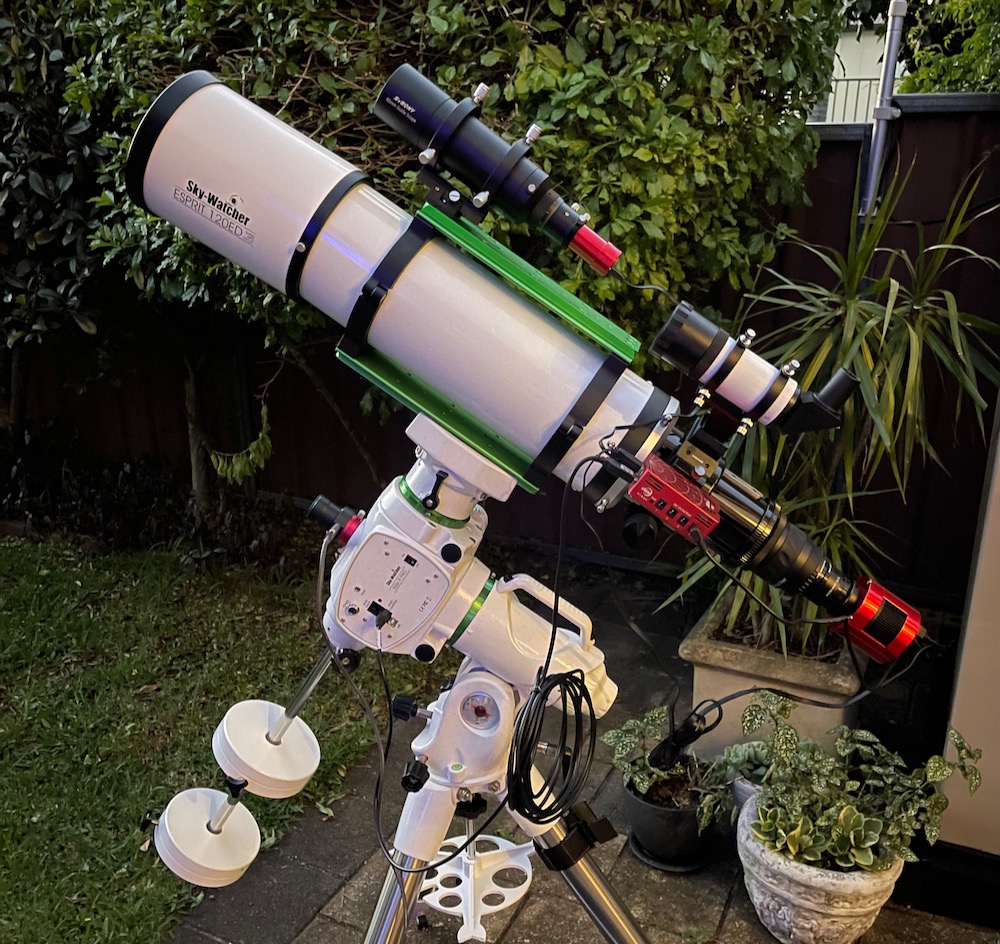 The Celestron is great for astrophotography for shooting deep sky objects like galaxies and nebulas.

The Skywatcher is a great all-round scope and it was the perfect choice for the Super Blood Moon.

I took up astrophotography only last year and it’s become a real passion.

Expect to see more stories about astrophotography and the equipment you need on Tech Guide and more videos about it on the Tech Guide YouTube channel. 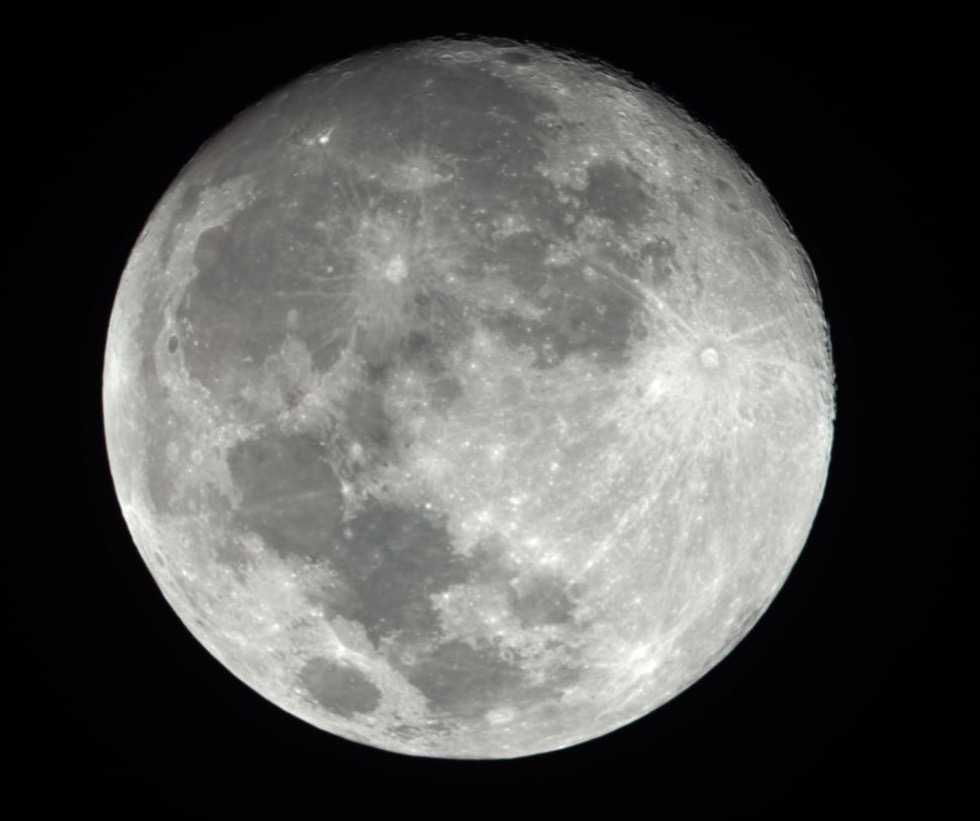 The good thing about the Super Blood Moon was we knew exactly when it was going to happen which made planning the shoot a lot easier.

I set up the rig earlier in the night so that when the eclipse started later in the evening I could do a few test shots to get the settings and exposure just right.

The first step for any session is to get the mount level and facing south. 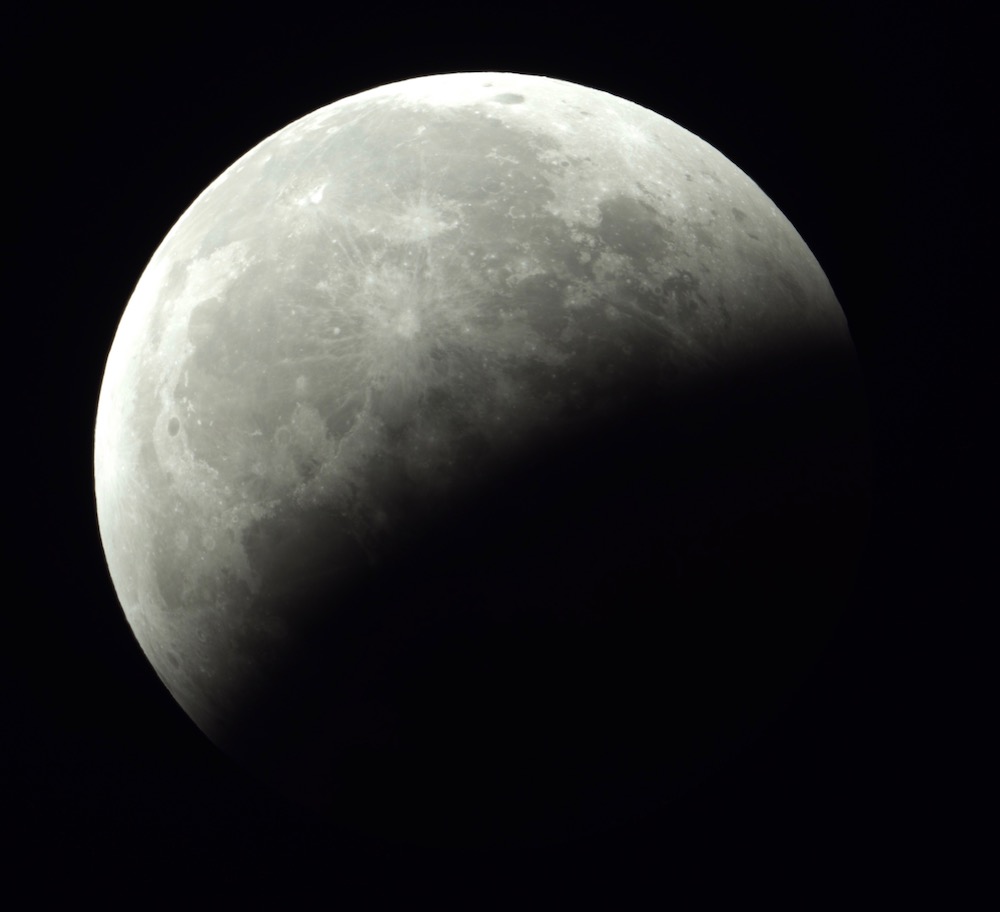 The mount is designed to follow the rotation of the earth – this is important because astrophotography requires exposures that aren’t measured in seconds but rather in minutes. Several minutes in fact.

To ensure it tracks correctly the first thing that needs to be done is a polar alignment which involves lining up the mount with a star in the southern sky – Sigma Octanis – which is positioned at the South celestial pole and doesn’t move all night.

In the northern hemisphere, astrophotographers align to Polaris – otherwise known as the North star.

I performed the polar alignment using a product from QHY called PoleMaster – it’s a small camera that attaches to the centre of the mount and connects to a PC so you can see the view through the lens on your computer screen. 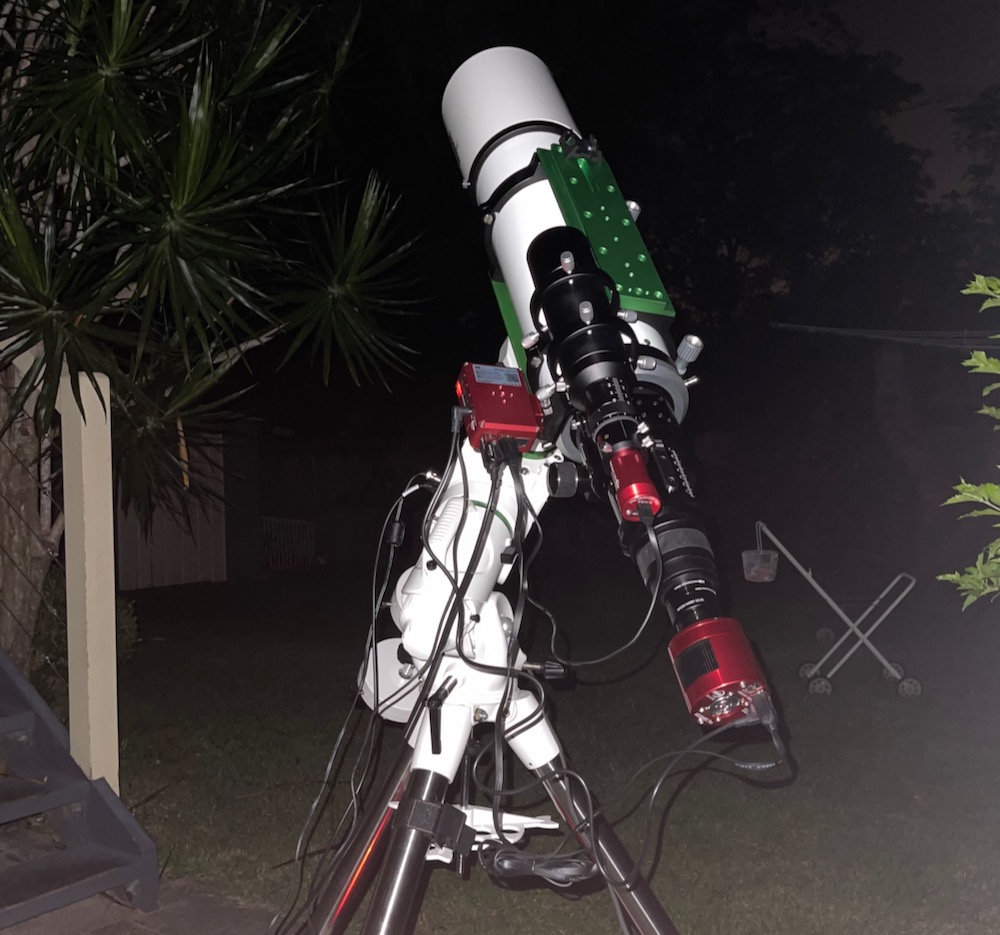 This makes it easy to adjust the altitude and azimuth screws to make sure the mount is pointing at the right star and in the right direction.

Also on the mount is a small device called the ASIAir Pro – it’s a small computer that connects the cameras and the mount and allows users to control it all using an app.

I run the ASIAir app on my iPad Pro and have full control over the mount and the cameras on the wireless network it creates.

On the camera side I had a choice of using either the Canon EOS RA – a DSLR designed with a filter for astrophotographers or a dedicated astro camera from Chinese company ZWO.

Either would have worked well in this situation but I decided to go with the ZWO – the ZWO ASI2600 Cooled OneShot colour camera to be precise.

The biggest difference between a DSLR and a dedicated astro camera is not only the design (the astro camera looks like a big tin can) but also the fact the astro camera can be cooled to a temperature down to minus 20 degrees Celsius.

When taking long exposures with a regular camera the sensor tends to heat up and this introduces noise (which looks like grain) into your image.

With a cooled astro camera which I had set to minus 10 degrees Celsius – that noise is almost completely illuminated.

So we had our mount, the telescope and the camera all connected and controlled using the ASIAir Pro.

After the polar alignment, the next task is to focus the telescope – we did this by taking fast two second exposures which, through the ASIAir Pro we can see on the iPad Pro before adjusting to get the focus exactly right.

When we’re targeting deep sky objects like nebulas, we normally take dozens of exposures, some as long as five minutes each, and use software to stack them to bring out the colour and luminosity of the deep sky objects.

There is also a fair amount of processing that goes on using Photoshop to really bring out the detail and the colour.

Now it was time to shoot.

In the case of the Super Blood Moon the exposures were going to be seconds long not minutes.

When I usually shoot the moon, it is so bright only a 0.1 second exposure is all that’s needed.

Anything longer than that and all you get is a bright white circle.

But it was different with the Blood Moon because the moon was covered by the earth’s shadow.

It took some experimenting to work out the right exposure to reveal the detail within the shadow.

Our best shots were with five second and three second exposures.

This was long enough to capture the detail of the moon surface under the shadow but not too long as to overpower the rest of the image.

There is a strong hint of pinkish red in our images – this is from the earth’s shadow which refracts light in the same way as the light in a sunset – hence the pinkish hue.

Once the shadow passed and started to recede we had to shorten the exposure time because the moon was returning to its original brightness.

I was very happy with the result but now we have to wait another 12 years before we can shoot the Super Blood Moon again.

The post How I shot the Super Blood Moon through my telescope appeared first on Tech Guide.

The US Department of Commerce announced a new rule to prevent the sale of hacking tools to China and Russia, The Washington Post reports. The Commerce Department outlined the chang…